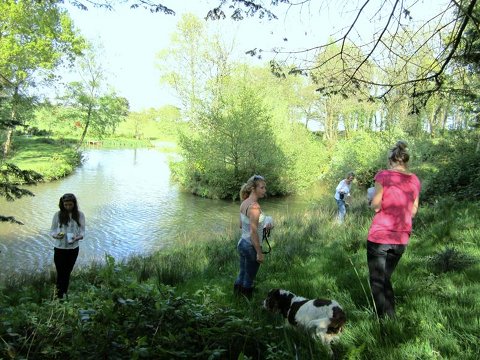 Today (20th March) is the Vernal Equinox marking the first official day of Spring. March, half in winter still but with glimpses of warmer days to come, feels like the gateway to Spring. The daffodils and primroses bring bursts of colour to the fields and hedges, though it will be a few more weeks until the trees grow their leaves back again. Midway through our lambing time and we are always a bit weary from round the clock checks in the lambing shed but seem to be surviving O.K! When I looked in on Tim just now as he was busy numbering lambs to match up with their mothers before they go out to the fields, I asked for his 'soundbite' for the newsletter, and he was surprisingly upbeat considering how long he'd been up for! He commented how this is the third year running that we've had pretty good weather for lambing after about 20 years when we'd get 3 weeks of rain, wind, hail storms and gales! So climate change, if that's what it is, has done us a favour for now. We've also got a fair bit of grass for the ewes to turn out on. There's nothing they like better than fresh spring grass and of course they then milk well, which make the lambs grow almost before your eyes!

Grass is the key to our organic farming system. In Spring and Summer for grazing and as silage and hay for winter feeding. It is why our grass fed beef contains up to 11 times more omega -3 fatty acids (the good one!)as well as higher levels of cancer-fighting conjugated linoleic acid and lower total fat. It is also completely different from the way in which so much US beef is raised in feedlots on a diet of mostly grain. This is why we have to question the relevance of the widely reported recent study by the Harvard School of Medicine which claims consumption of red meat is linked with early deaths and also be aware that beef in the US is allowed hormone growth promoters which are banned by in the UK.

A more positive report was the one conducted by the Countryfile BBC programme broadcast a few Sundays ago about the animal welfare claims on different food labels, comparing Soil Association organic with others such as the Red Tractor and Freedom Foods. In all the examples they gave-such as minimum space for poultry and maximum transportation times for livestock, the organic scored highly whilst others often only met minimum EU standards. I think people sometimes don't realise quite how much the organic label means; it covers pretty much everything we as farmers do in terms of managing the land and wildlife, the livestock and then right through to the abattoir and in the butchery. Every ingredient and recipe has to be licensed by the Soil Association and inspected, so the integrity of organic produce is genuinely traceable from field to fork! My next job today is getting the new merguez and Hugh's herby pork sausages which we are making for the River Cottage Canteens in Axminster and Plymouth registered with the Soil Association Certification and trying to get my head round the operations of the weigh scale machine to make it print the ingredients correctly. It's easier making the sausages than working out the labelling!!

Easter is not far away-apparently it always falls on the first Sunday after the first full moon after the Vernal Equinox. Good luck working that one out!!!

I hope you have a Happy Easter.

Jo, Tim and all at Higher Hacknell Farm