The herald of the future 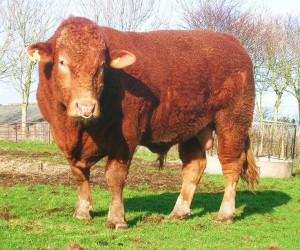 Every three years we need to replace our bull, so that we don't breed back into the same bloodlines. Last Wednesday Tim and I left George, the veterinary student in charge of lambing and went off in the landrover and trailer to Exeter to the South Devon Herd Book Society Spring Show and Sale. It's four years since we bought Tregondale King Cole, our current bull, and we've used another bull, a ruby red Devon on his daughters for the last year and now we really must get a new bull. It's not so easy though getting the bull you want at auction and the last two times we've tried to buy at the sale we have been outbid on what we wanted and had to buy later privately. The Show is a good place to see the best of the breed. It started at 9.30 and each class of bulls was paraded bytheir owners in the ring and judged while we checked their pedigree in the catalogue and marked down which we liked. Obviously size and conformation-a good well rounded behind- are important, as well as an attractive coat and head. Much of it is personal choice but the techical side-which now is referred to as EBV or estimated breeding value, records statisics such as calving ease, fertility, birthweight, growth at various ages and carcase information. It's alot to take in! Then, having chosen a few we liked the look of there is the questionof bidding, do we bid early so if we don't get one we have more chances, or do we hang on for the ones we liked the most and risk getting outbid and coming home with nothing? After the juding, which took till lunchtime when we'd seen so many bulls we were getting confused! We discussed our tatics and decided we'd miss the first few and wait for our favourite. Even though Timwas doing the bidding I was getting really nervous by now, and my heart was beating! The first went for reasonable prices and then no 14 came in and Tim got bidding. We'd decided that the right bull is so important for the future of the herd that we'd spend more than we'd done previously and as someone bid against us, the auctioneer kept going up in hundreds of guineas until finally the other person dropped out and the autioneer banged down his hammer and pointed at us! It was a great relief and although it was the top price paid up till then at the sale we knew we'd got what we wanted. Interestingly the prices went up after that and some of the other bulls we'd selected but not liked as much went for even more. A bull from the same herd as the one we bought made the top price of the day so we were pretty pleased and as Tim led him into the trailer, he said he heralds a new future! I'm sure he'll give us cattle we'll be proud of.