During the past month the hillsides have very much come alive! During the winter when there isn't much grass the countryside is a quiet place to be, but right now there is a cacophony of bleating lambs and anxious cows calling their calves everywhere you turn! Amongst the many new arrivals on the farm, the most prominent and certainly the most demanding has been my new Springer Spaniel puppy, 'Buddy'. 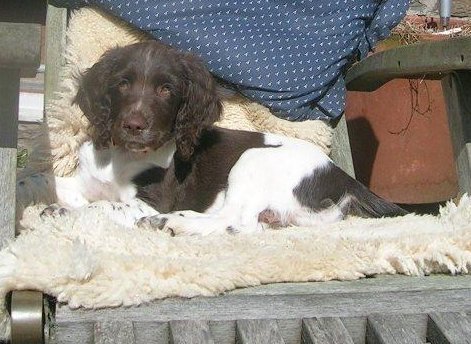 However he has incentivised me to get out of bed early and give Tim a helping hand by checking the stock, a daily routine, while out walking. It's especially important right now with so many newly born animals. In particular we have to check the cows udders arn't bursting with milk, a sign that her calf isn't feeding, or any animal on it's own could mean things arn't quite right. The other day there were 5 cows on one side of the hill but 6 calves, as one calf had not found her way across the stream and up the other side of the hill.to join it's mother, so it needed sorting out. We have also had to bring in cows and calves when their mothers are just producing too much milk and the calf can't keep up, which could cause mastitis in the cow if left. We then either milk the cow by hand or sometimes put a stronger calf on it to drink the milk, but whichever method we use there's a chance of a kicking from the cow!

We've had over thirty cows calve since Easter, as the lambing pretty much came to an end, calving begun. Tim was kept busy sorting things out when there were 8 calves born in less than 2 days, as some of the young heifers didn't really know or care what had happened to them and wandered off leaving their calves, while others had maternal instinct in overdrive and became too aggressive to get close to. It's one thing managing the farm, but worse is the admin attatched to each animal as every calf born has to be registered within a few days of birth and then receive a passport from the government. Dealing with the bureaucracy is what really drives Tim mad, the phone calls, on line systems with passwords that don't work......., you get the picture! But however frustrating things can get, it is a beautiful time of year, the swallows have arrived, the fields and woods are filled with the sound of birdsong, the leaves are coming out on the trees a vibrant green and what we want is some rain!!