We truly believe that you should know exactly how and where the organic meat you buy from Higher Hacknell Farm is reared and raised. So in this blog post we’d like to tell you a bit about our organic pork. Plus as it's Organic September, there is 10% off all of our organic pork products - just use code ORGANIC21 at checkout.

Organic little piggies
From time to time we rear weaners, which are 8-10 week old piglets.  We have had a fine little group of Berkshire cross British Lop piggies here for the last few months, but when we don’t have any, we buy them from our good friend Roddy Hall in South Devon, who runs a small herd of 6 pedigree Oxford Sandy Black sows. 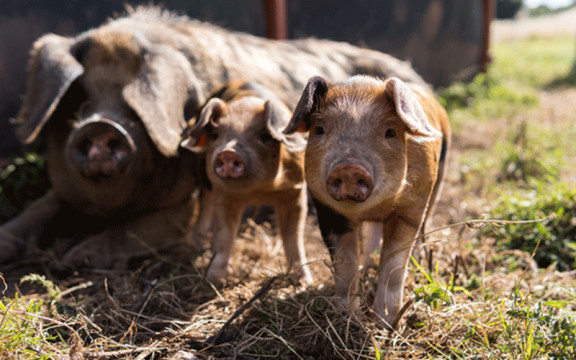 Roddy's sows have a couple of litters a year and are fed a varied diet of vegetables which are grown on his farm, and they also love to clear up the veg fields of anything left behind after harvest. They are slow growing and extremely tasty, and being a traditional breed they carry a bit more fat, but in my view this is no bad thing!

In addition to vegetables and forage, such as grass, hay or silage, our pigs are also fed a 100%  organic ration which is usually comprised of barley, soya bean, wheat, beans, lucerne and sunflower seed, together with various trace elements and vitamins. Importantly there are no GM (genetically modified) ingredients which are found in most conventional feed rations.

More than just free-range
One of the questions we are often asked is ‘are organic pigs free-range?’ I like to think that it goes without saying that organic pigs are ALWAYS free range as organic animals must have permanent access to pasture (except in particularly difficult, cold or wet conditions) and are encouraged to forage and graze with plenty of space and fresh air to thrive and grow. In addition to fresh clean water to drink, they must also have a place to wallow and get themselves muddy - as well as being enjoyable, this helps to keep them cool, protecting them from sunburn, flies and external parasites. 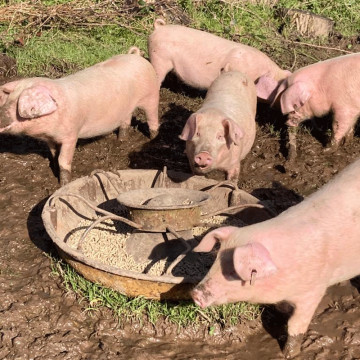 Organic pigs are happy pigs!
So how does rearing organic pigs differ from other free range and conventional systems? The tails of organic pigs are not docked (cut short), nor are their teeth cut and they do not have painful nose rings fitted. Organic pigs must have the opportunity to express their natural behaviours, such as rooting around, by having plenty of space. Pigs reared in organic systems are weaned much later than standard ones - at 40 days rather than as early as 21 days, but the Soil Association advises its farmers not to wean pigs until they are eight weeks old. This allows the piglets to develop at a natural pace, reducing stress and disease and notably, antibiotic use. Antibiotics are never preventatively or routinely used in organic systems and may only be used to treat an animal if it becomes sick. If this happens the rules are that the withdrawal period before the meat can be eaten has to be increased, usually doubled. A word about antibiotics in farming
The overuse of antibiotics in human and animal medicine is undermining their ability to cure life-threatening infections. The more sparingly we use our antibiotics, the more effective they will remain. Use on farm animals accounts for around 30% of all antibiotics used in the UK. In intensive farming systems, to compensate for animals being housed in more crowded conditions where infections spread fast, antibiotics can be used as a preventative measure - before animals show signs of illness - or for group treatments after a disease outbreak which could have been avoided had the animals been kept in better conditions in the first place. Thanks to higher animal welfare standards which reduce the risk of disease, the preventative use of antibiotics is banned in organic farming.

When the time comes
When our pigs reach maturity at around 6-10 months old, we (or Roddy) take them to our local abattoir (which is Soil Association organic registered) where they are always killed humanely under veterinary supervision. They are then brought back to our farm butchery at Higher Hacknell where they are prepared by our master butcher into joints and cuts, bacon and sausages. Our sausages are all handmade and contain no preservatives or nasties, which is good to know!

More information
For more about portion and serving sizes, please see the 'Have a Crackling Christmas' blog post that we wrote last December, which also has some cooking tips and our recipe section. And of course, if there’s anything else you’d like to know, please phone me on 01769 560909 or email info@higherhacknell.co.uk.